The weather was turning it on last week for Neskaupstadur. When that sun comes out, it’s like there’s instant good vibes everywhere. I’ve never loved and appreciated the sun so much.  The sun combined with clear skies, mountains and snow can produce some of the best weather and aesthetically pleasing landscapes. Yep, I’m going to do it, I’m going out and calling Neskaupstadur, The town with the world’s best sunsets! One hundred times better than any of the sunsets in South East Asia. The other day we had the best sunset of all time, it even shocked the locals that live here. Even they started taking pictures of it. 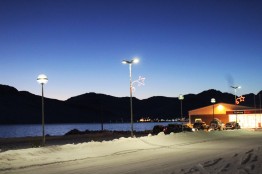 One thing we didn’t want to miss while being here was the Aurora Borealis also known as the northern lights. We had arrived in Iceland at the start of December and had high hopes of seeing the northern lights as soon as we got here. I thought being in Iceland would automatically mean northern lights every night. Turns out there’s a couple of key factors that need to fall into place for the northern lights to appear. First of all, a dark sky with complete clarity is needed. If it’s a dark but cloudy night, forget about it. Snowing? No chance in seeing them. The best time to see the northern lights are from September to mid-April. The darkest months are from November to February, although that period consists of lots of snow and rain.

However, the other night we had perfect conditions! It was freezing cold, the sky was clear as day, and it was very dark. There’s a couple of websites you can check out to see what the chances are of the northern lights and the reading we got was 6 out of 10, compared to 2 out of 10 which we had the other nights. Just before dinner, around 5:30pm we saw what looked like grey clouds with a tinge of green to it, which would appear and disappear. I was lucky enough to see the northern lights in the Faroe Islands but Eb hadn’t yet, so she was going mental, even though it wasn’t much at all. Not much happened later on that evening so Eb went to bed and I was watching TV.

Just after midnight, our roommates went to have a quick look outside before going to bed, then they came back in and said that it looked like it’s going to happen. I walked outside and boom! It appeared as I walked outside of our apartment. I ran back in and got Eb out of bed. She was so excited she just threw on her coat and went outside while her legs were exposed to the cold weather! It was such a beautiful moment witnessing these lights. They really do dance! We have these massive mountains behind our apartment which were covered in snow, so the mountains would slightly change with tones of green. We were so loud that we woke up our other friends in the apartment below who then came outside and admired the lights with us. The lights were so strong that it was appearing even with the town lights on. Imagine if we’d gone out of town in to complete darkness! I tried to take a couple of pictures but it was just too hard as I didn’t have a tripod and my hands were so cold that I kept shaking the camera, so instead I just admired what was going on. The lights hung around for 30-40 minutes. We were so lucky that we saw them, we were starting to get worried we wouldn’t see it. The northern lights definitely lived up to its expectation. Another box ticked!

The only photo from the night, by our roommates

4 thoughts on “The Best Sunset Ever and The Northern Lights”